SHOULD ALL CHRISTIANS PRAY CEASELESSLY? -by St. Nikodemos the Hagiorite- 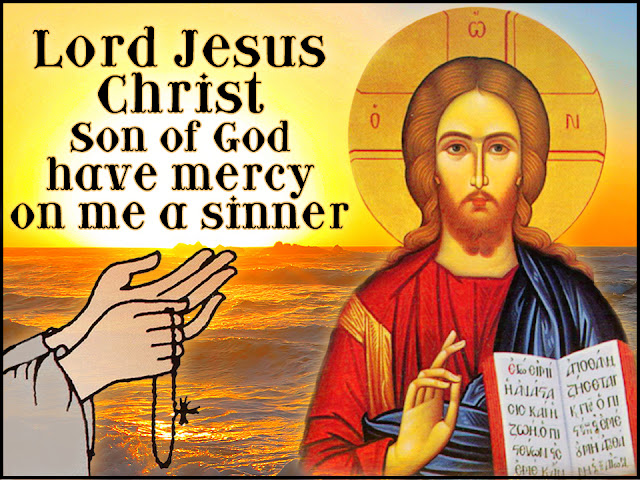 SHOULD ALL CHRISTIANS PRAY CEASELESSLY?
-by St. Nikodemos the Hagiorite-

My beloved Christians, let no one think that only members of the clergy and monastics are obligated to pray ceaselessly at all times, whereas laypeople are exempt from this. No! Not at all!

All Christians in general have the obligation to constantly be in a state of prayer.

The most-holy patriarch of Constantinople Philotheos writes the following in regard to this matter, in his biography of St. Gregory Palamas, Archbishop of Thessaloniki: The divine St. Gregory was close friends with a guileless and virtuous monk named Job. Once, while conversing with him, he referred to the fact that every Christian in general must make a sustained effort to pray ceaselessly, citing the Apostle Paul who commands all Christians: “Pray ceaselessly” (1 Thes. 5:17); the prophet David who—despite the fact that he was a king and had to attend to all the matters of his kingdom—states: “I beheld the Lord ever before me” [through prayer] (Ps. 15:8); and St. Gregory the Theologian who similarly advises all Christians that it is necessary to commemorate the name of God through prayer more frequently than we breathe.
Read more »
Posted by ΦΙΛΟΜΑΡΤΥΣ at 7:04 AM

The Blessed Saint Matrona is one of the most beloved Muscovite saints, who lived and worked miracles in our times, and her story and relics are cherished by all Russians.

Now, English speakers can be glad to hear that a Russian TV series on this wonderful saint is available on YouTube with English subtitles.

The series is the result of nine years of archival work, putting together some of the most amazing miracles attributed to St. Matrona, and is aptly named “The Wonderworker Woman.”

Email ThisBlogThis!Share to TwitterShare to FacebookShare to Pinterest
Labels: ~VIDEOS, Life of the SAINTS

The Story of the Miraculous Icon of the Virgin Known as “Paramithia” (Comfort, Consolation) at the Holy Mountain Monastery of Vatopedi 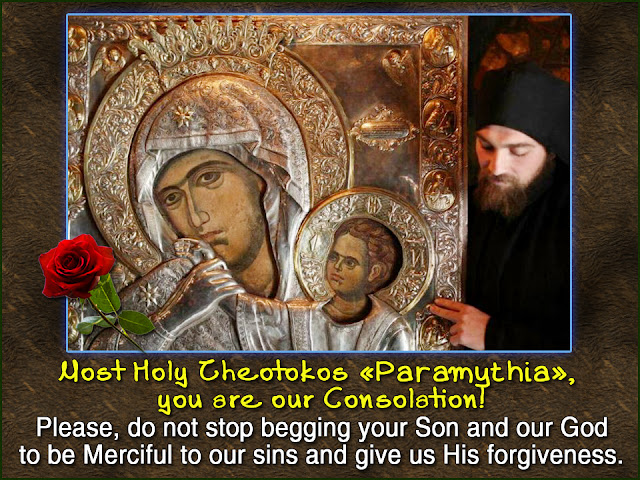 The Story of the Miraculous Icon of the Virgin
Known as “Paramythia” (Comfort, Consolation)
at the Holy Mountain Monastery of Vatopedi
+ January 21

In olden times there came once to the Holy Mountain a band or pirates to enter into and loot one of the wealthiest monasteries of the Holy Mountain, the Monastery of Vatopedi. They arrived in the evening and hid in the bushes around the monastery so that they could enter as soon as the gates were opened the following morning. However, the Caretaker of all the Holy Mountain, the Most Holy Virgin Theotokos, would not permit the carrying out of this barbarous act. This is how the plan of the pirates was averted:
Read more »
Posted by ΦΙΛΟΜΑΡΤΥΣ at 10:16 AM 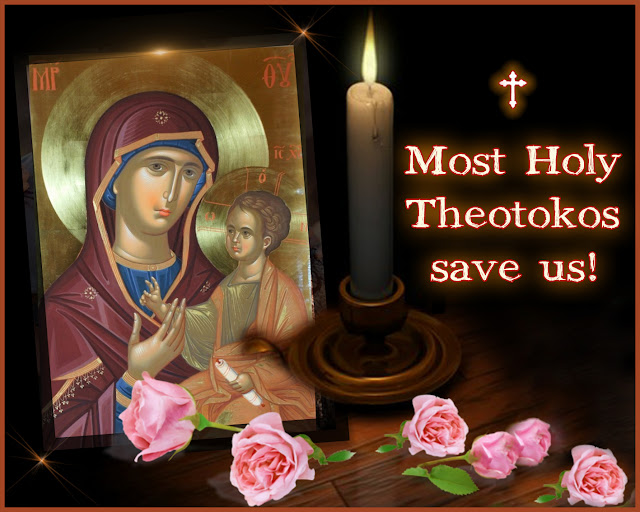 
Question: Why do you pray to the Mother of God?

Answer: Since Jesus Christ died on the Cross and rose from the dead, conquering death for us, there is no reason why we cannot ask those in heaven to pray for us just as we ask those still living on earth for their prayers. After all, in Christ all are alive. Therefore we ask the Ever-Virgin Mary to pray to her Son for us, just as we also ask the angels, the saints, and all the faithful believers here on earth to pray on our behalf, as Scripture commands us to do: “I exhort therefore, that, first of all, supplications, and giving of thanks, be made for all men… I will therefore, that men pray everywhere” (I Timothy 2:1,8). We turn readily to our friends and neighbors to ask for their prayers in our time of need; are not those in heaven even more our friends than those on earth? Why should they not intercede for us also before the throne of God?
Read more »
Posted by ΦΙΛΟΜΑΡΤΥΣ at 10:40 AM

Sayings of St Anthony the Great 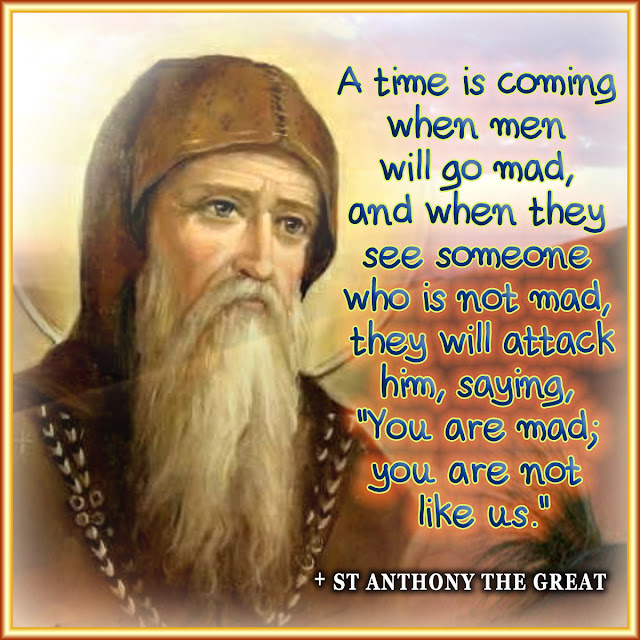 Sayings of St Anthony the Great

1. When the holy Abba Anthony was living in the desert, he fell into acedia (a lack of concern for his salvation/ indifference to spiritual things) and was darkened by many impassioned thoughts (logismoi). He said to God, ”Lord, I want to be saved, but these thoughts will not leave me alone. What shall I do in my distress? How can I be saved?” A little later, when he got up to go out, Anthony saw someone like himself, sitting and working, then rising from work and praying, and again sitting and plaiting a rope, then again rising for prayer.” It was an angel of the Lord, sent to correct him and assure him. And he heard the angel saying, “Do this and you will be saved.” And when he heard this, he was filled with great joy and courage. He did this, and he was saved.

A historical film by Vladimir Khotinenko, unveils a page of the Second World War history that is little known of - the Russian Pskov Orthodox mission, that had to survive in Pskov region after it had been occupied by German fascists. Times long gone, but there are still wars, and each of us still faces the same daily choice - remain a human or become a beast and a traitor...

Posted by ΦΙΛΟΜΑΡΤΥΣ at 6:48 PM

Email ThisBlogThis!Share to TwitterShare to FacebookShare to Pinterest
Labels: ~VIDEOS

The night of Christmas 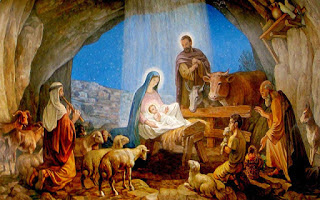 The night of Christmas

It was slowly getting dark and the sun was disappearing behind the mountains of Bethlehem. The cold and frost made the inhabitants of this small village, as well as all those who came from distant places to be registered at the place of their birth, go inside their homes early. Soon the streets were deserted and no one was walking about outside.
To tell the truth not everyone, because just outside the village a pious man, leading a donkey with a young girl on its back, who looked like she was pregnant, was anxious to arrive at a house in time before it got too late.
Every now and then, he was trying to give her courage, because he saw that the time to give birth had come and the young girl was extremely tired from the trip which had taken several days.
Some hours ago he had given her his cloak and everything else he had to cover her and keep her warm, while in the twilight he was looking for the path leading to the village.

THE NATIVITY ICON IN BYZANTINE ART 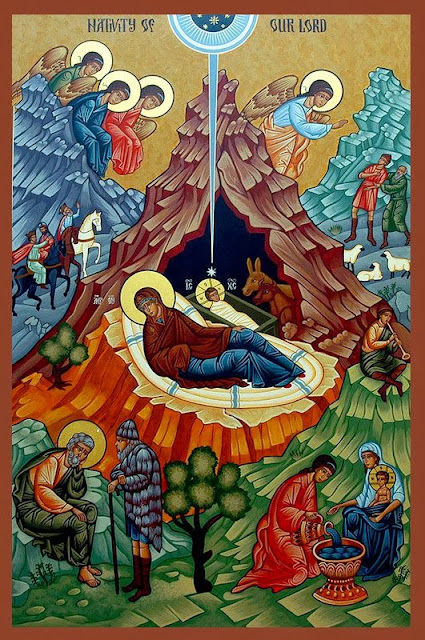 THE NATIVITY ICON IN BYZANTINE ART

Orthodox Christians do not celebrate the birth of baby Jesus, we celebrate the Incarnation. What?, you say. What is the Incarnation? This is an important word as it means God becomes Man. This is what we celebrate. The birth of Jesus was that moment in history when God sent His only begotten Son to become like us, taking on human flesh for our healing. This miracle of miracles took place though the ascent of Mary whom we call the Theotokos, Birth-giver of God. God with His divine will became man, taking on a human will in human flesh so Man could unite his human will with God’s divine will. From the time of Adam and Eve, man was separated from God ,unable to follow God’s law. The Incarnation is the beginning of the transformation of mankind so we can be reunited with God.

Above you can see the icon of the Nativity. Let’s look at each element of this icon to learn what it communicates to us.
Read more »
Posted by ΦΙΛΟΜΑΡΤΥΣ at 9:53 AM 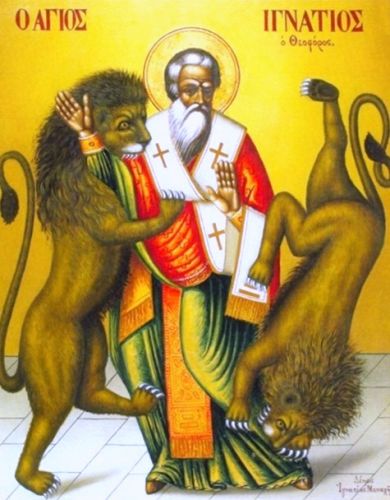 Saint Ignatius unceasingly repeated the name of “Jesus Christ”.
When they asked him why he was doing this, Saint Ignatius answered that this name was written in his heart!

The Holy Great Martyr Ignatius was named the ‘God-Bearer’ because he always carried the name of the living God in his heart and on his lips. Also, traditionally, he was thus named because he was held in the arms of Christ, the incarnate Son of God.

In the Gospel of Matthew (18:2-5), there is a passage that reads:
“And Jesus called a little child unto him, and set him in the midst of them, and said: ‘Assuredly, I say to you, unless you are converted and become as little children, you will by no means enter the kingdom of heaven. Therefore, whoever humbles himself as this little child, is the greatest in the kingdom of heaven. And whoever receives one little child like this in My name receives Me.’”
The child whom Jesus selected to illustrate his parable, and upon whom He endowed a spark of divinity with the touch of his hand, was a child named Ignatius, who thereafter grew up in the sacred company of the Apostles of the Lord and went on to become one of the most venerated of all our saints.
Read more »
Posted by ΦΙΛΟΜΑΡΤΥΣ at 9:00 PM

Email ThisBlogThis!Share to TwitterShare to FacebookShare to Pinterest
Labels: Life of the SAINTS

St Anthony The Great and The Shoe Maker 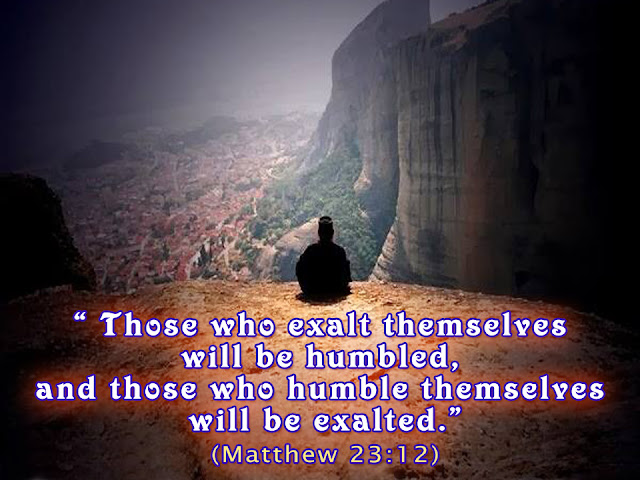 St Anthony The Great and The Shoe Maker

At some time, St. Anthony the Great thought to himself “I wonder with whose spiritual achievements my spiritual life can be compared with”. God, however, in order to humble this thought revealed to him in a dream that superior to him was a shoe-maker who had a store in the back streets of Alexandria.

Once it was daybreak, the saint took his staff and headed off to the city. He wanted to meet in person this famed shoe-maker and see his virtues. With great difficulty he discovered his store, sat down at the counter and began asking about his life.
Read more »
Posted by ΦΙΛΟΜΑΡΤΥΣ at 8:31 PM

Two Men in a Hospital 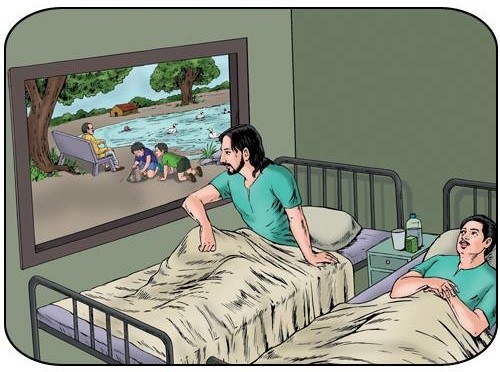 Two Men in a Hospital


Two men, both seriously ill, occupied the same hospital room. One man was allowed to sit up in his bed for an hour each afternoon to help drain the fluid from his lungs. His bed was next to the room’s only window. The other man had to spend all his time flat on his back. The men talked for hours on end. They spoke of their wives and families, their homes, their jobs, their involvement in the military service, where they had been on vacation.
Read more »
Posted by ΦΙΛΟΜΑΡΤΥΣ at 7:42 PM

A CHRISTMAS GIFT TO JESUS 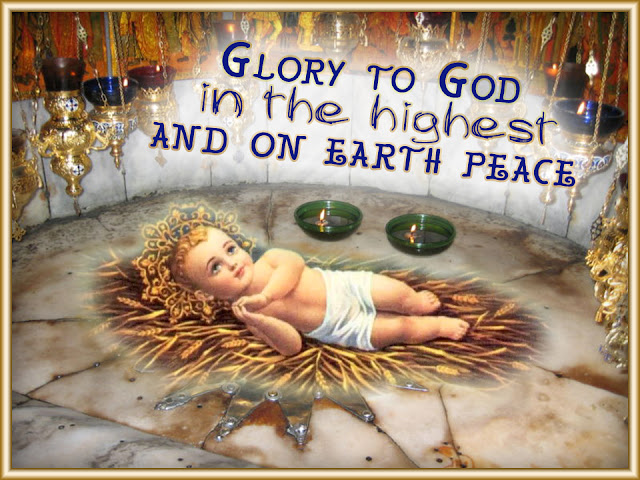 A CHRISTMAS GIFT TO JESUS

It is told that a Christmas Eve in Bethlehem, about four centuries after the birth of Christ, saint Jerome had the holy desire to worship the place where our Savior was born.
So, he came into the holy cave but there, while he was praying and meditating on the first Christmas, he had a wondrous vision.
Jesus Christ appeared to him as a child in the midst of a brilliant and dazzling light and asked him with His sweet heavenly voice:
“Jerome, what gift will you give Me for my birthday today?”

Other pages to visit